Programme of Action adopted at the International Conference on Population and Development. Cairo, 5–13 September 1994 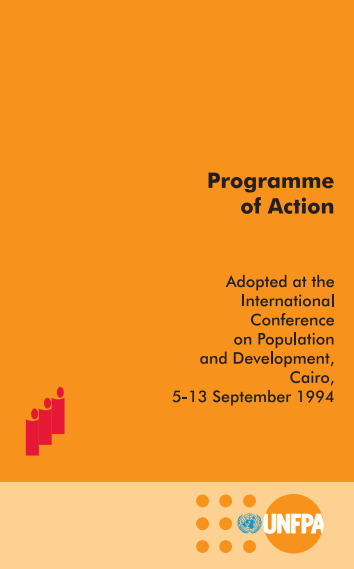 On the occasion of the tenth anniversary of the International Conference on Population and Development, UNFPA, the United Nations Population Fund, is pleased to issue this pocket edition of the ICPD Programme of Action, which was adopted by 179 governments in 1994, and the Key Actions for its further implementation, which were adopted by the United Nations General Assembly in July 1999. The Cairo Conference, held from 5 to 13 September 1994, was the largest intergovernmental conference on population and development ever held. A total of 11,000 participants—from governments, the United Nations, intergovernmental organizations, non-governmental organizations and the media—contributed their expertise to make the Conference a critical success. The Cairo Conference moved population policy and programmes away from a focus on human numbers to a focus on human lives. It put the emphasis where it should be: on improving the lives of individuals, and increasing respect for their human rights. Delegates from all regions and cultures agreed that reproductive health is a basic human right. The Programme of Action underscores the integral and mutually reinforcing linkages between population and development. It urges the empowerment of women both as a highly important end in itself and as a key to improving the quality of life for everyone. At Cairo, the international community reached consensus on three quantitative goals to be achieved by 2015: the reduction of infant, child and maternal mortality; the provision of universal access to education, particularly for girls; and the provision of universal access to a full range of reproductive health services, including family planning. These ICPD goals are reinforced by the agreements of other global United Nations conferences of the 1990s and, most recently, by the Millennium Summit in September 2000. Indeed, the ICPD goals are essential for meeting the Millennium Development Goals to reduce widespread poverty, hunger, disease and gender inequality by 2015. The Programme of Action estimated that $18.5 billion annually, in national resources and international assistance, would be required by the year 2005 to implement its recommendations, and called on governments to make those resources available. At the midway point, funding remains a critical concern, with international donors falling far short of providing their agreed one third share of the required funds. The adoption of the Programme of Action marked the beginning of a new era of commitment and willingness on the part of governments, the international community and civil society to integrate population concerns into all economic and social planning and policy-making. The five-year review showed that the ICPD goals are still valid and that much progress had been made in advancing them. At the same time, it revealed that much greater and urgent action was needed to reduce maternal morbidity and mortality, address the sexual and reproductive health needs of adolescents and young people, prevent the spread of HIV/AIDS, and provide reproductive health care to women and youth in emergency situations. The Key Actions adopted at the special session of the General Assembly affirm the ICPD goals and provide a set of benchmarks for achieving them. It remains our collective task to strengthen and expand initiatives to meet the goals of the Programme of Action so that present and future generations will enjoy a better quality of life. Thoraya Ahmed Obaid Executive Director United Nations Population Fund