Global Report on Trafficking in Persons 2016 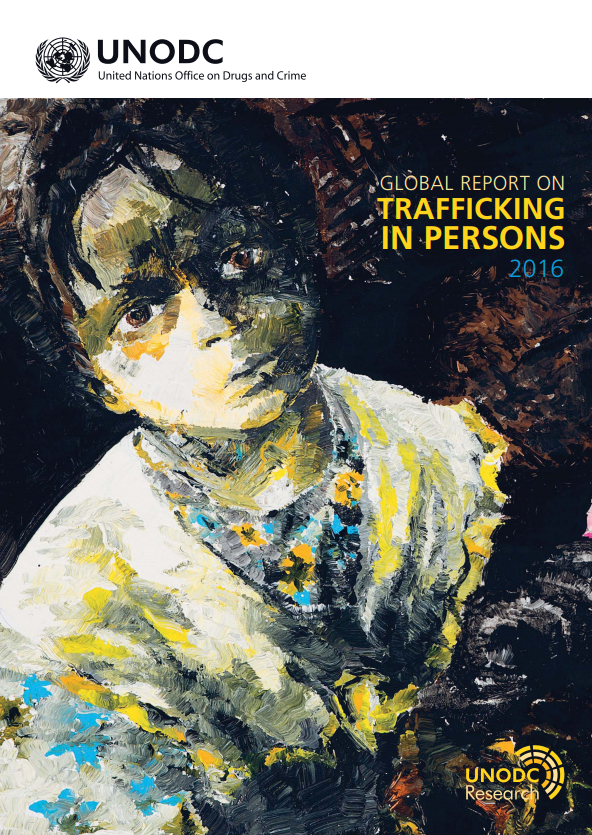 Since the last Global Report on Trafficking in Persons in 2014 there have been a number of significant developments that reinforce this report’s importance, and place it at the heart of international efforts undertaken to combat human trafficking. Perhaps the most worrying development is that the movement of refugees and migrants, the largest seen since World War II, has arguably intensified since 2014. As this crisis has unfolded, and climbed up the global agenda, there has been a corresponding recognition that, within these massive migratory movements, are vulnerable children, women and men who can be easily exploited by smugglers and traffickers. Other changes are more positive. In September 2015, the world adopted the 2030 Sustainable Development Agenda and embraced goals and targets on trafficking in persons. These goals call for an end to trafficking and violence against children; as well as the need for measures against human trafficking, and they strive for the elimination of all forms of violence against and exploitation of women and girls. Thanks to the 2030 Agenda, we now have an underpinning for the action needed under the provisions of the UN Convention against Transnational Organized Crime, and its protocols on trafficking in persons and migrant smuggling. Another important development is the UN Summit for Refugees and Migrants, which produced the groundbreaking New York Declaration. Of the nineteen commitments adopted by countries in the Declaration, three are dedicated to concrete action against the crimes of human trafficking and migrant smuggling. UNODC’s report is also the last before the world gathers in 2017 at the UN General Assembly for the essential evaluation of the Global Plan of Action to Combat Trafficking in Persons. These decisive steps forward are helping to unite the world and produce much needed international cooperation against trafficking in persons. But, to have tangible success against the criminals, to sever the money supplies, to entertain joint operations and mutual legal assistance, we must first understand the texture and the shape of this global challenge. The Global Report on Trafficking in Persons does exactly this. It provides a detailed picture of the situation through solid analysis and research. The findings are disturbing. Traffickers may target anyone who can be exploited in their own countries or abroad. When foreigners are trafficked, we know that human trafficking flows broadly follow the migratory patterns. We know from the report that some migrants are more vulnerable than others, such as those from countries with a high level of organized crime or from countries affected by conflicts. Just as tragically, 79 per cent of all detected trafficking victims are women and children. From 2012-2014, more than 500 different trafficking flows were detected and countries in Western and Southern Europe detected victims of 137 different citizenships. These figures recount a worrying story of human trafficking occurring almost everywhere. In terms of the different types of trafficking, sexual exploitation and forced labour are the most prominent. But the report shows that trafficking can have numerous other forms including: victims compelled to act as beggars, forced into sham marriages, benefit fraud, pornography production, organ removal, among others. In response, many countries have criminalized most forms of trafficking as set out in the UN Trafficking in Persons Protocol. The number of countries doing this has increased from 33 in 2003 to 158 in 2016. Such an exponential increase is welcomed and it has helped to assist the victims and to prosecute the traffickers. Unfortunately, the average number of convictions remains low. UNODC’s findings show that there is a close correlation between the length of time the trafficking law has been on the statute books and the conviction rate. This is a sign that it takes time, as well as resources, and expertise to chase down the criminals. Perhaps the 2016 Report’s main message is that inroads have been made into this horrendous crime. We must, however, continue to generate much needed cooperation and collaboration at the international level, and the necessary law enforcement skills at the national and regional levels to detect, investigate and successfully prosecute cases of trafficking in persons. The 2016 report has done a fine job of setting out the situation, but there is more to be done.